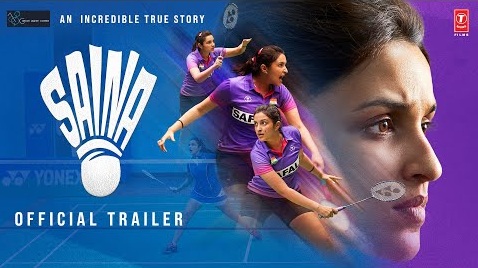 STORY: This films is based on Saina Nehwal’s Life. She is very good badminton player. This movie shows the story of her life, how she followed her passion? And what difficulties she faced? This movie also pays tribute to the people who extremely contribute to their country.

REVIEW: We can’t be Champion overnight. Champions are made. Saina Nehwal is a daughter of Usha and Harveer Singh Nehwal. She became the first Indian woman to achieve the world No. 1 ranking in badminton and the second Indian after Prakash Padukone. Saina Nehwal is just 31 years old and if you are a sports lover, then I am very sure that you are well aware of her achievements.

Even an individual sport has a circle of well-wishers and experts who help to rebuild faith when it threat of to slip away. After a near-fatal injury, months of confinement and watching the world pass by, at that time her mother gave her a power to think and said, “You are Saina Nehwal. Tu sherni hai. Don’t let the world think about you. Self-doubt is one of the biggest enemy of ourself. Shaq ko apney dil mein ghar na karne dena.” It is the mother, whose big ambition to see her daughter become the world no 1 bandminton player.

Most of Indian biographical sports movie’s stay’s in a circle to play safe. What you watch in a movie is a biography that rarely scratches the surface or goes beyond the obvious. In every biography you see they all tell about Struggles, road to glory, downfall and resurrection — you know these things which follow a pattern. Since sportsmen are much respected in the country, not everyone dare to address the skeletons in the closet. Amole Gupte also keeps his story simple. The filmmaker highlights everything like ups and downs of Saina’s life, ensuring his storytelling isn’t patronising or over the top patriotic.

The film is a dramatised so we are not sure if this was real, but a mother doesn’t think twice before giving a slap to her daughter who is 12 year old for seeing her happily flaunt her runner’s up medal. In the world of sports, there is no place for people who come second. Saina’s father tell her why winning is everything for his life. You can expect that this incident will change her life.

We should appreciate brilliance of Director, working with children in this film highlight as well. Watching Mumbai’s talented 10-year-old Naishaa Kaur Bhatoye (as young Saina) showing her skills on court is fantastic. Not only does she represent the real Saina, her dominance of the game gives the film an edge. Saina allows Gupte to capture the energy of an athlete and ambition of Saina that he so craves to portray. It was not so easy For Parineeti Chopra to play a role of badminton champion because she was not from sports background. Parineeti’s best isn’t enough as she gives an impression of not being in the moment in some crucial scenes.Parineeti did lots  of hard work for this movie, like bodybuilding you should make your body in a posture like a sportsman and all that, not everyone is ready for this admirable change  but she daires and did that. Shreya Ghoshal’s Chal wahi chalein in particular and Parinda will allways stay with you.

This was a tough for Amole because Saina’s life is with no controversy, she is very calm. The fact that she is an active sports person. Her parents are very supportive, and she have a loving sister, great set of friends and a husband (Parupalli Kashyap) that doubles up as her cheerleader. Amol Gupte’s film is a feel good tale about India’s poster girl for Badminton. Saina, this movie is much  inspiring the youth.